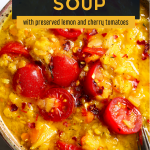 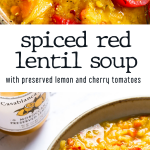 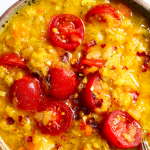 I’m sneaking in one last cozy soup recipe for the season in the form of this spiced red lentil soup. This basic recipe can be made with very few ingredients and is extremely flexible. It’s not anything new, just my take on a pretty classic red lentil soup. What makes it special is a quick little preserved lemon and tomato salad stirred in at the end. The result is a a serious flavor bomb of a soup- you’ll be biting into tender juicy cherry tomato halves and tangy bits of preserved lemon with every spoonful of brothy spiced red lentils.

I regret not having anything green and herbaceous to top this with, and that nearly stopped me from shooting the recipe at all. My “all or nothing” tendency has not been serving me well during this period of isolation where trips to the store are extremely infrequent. But I’m trying to be more flexible and just work with what I have. I would encourage you to do the same especially if you think you might like to make this recipe but you don’t have one or more ingredient. Make it work! That’s often how delicious new meals are conceived, in my experience. Flexibility is a trait that I admire in others and am constantly trying to embody in my own life, and there’s never been a better time to practice going with the flow. 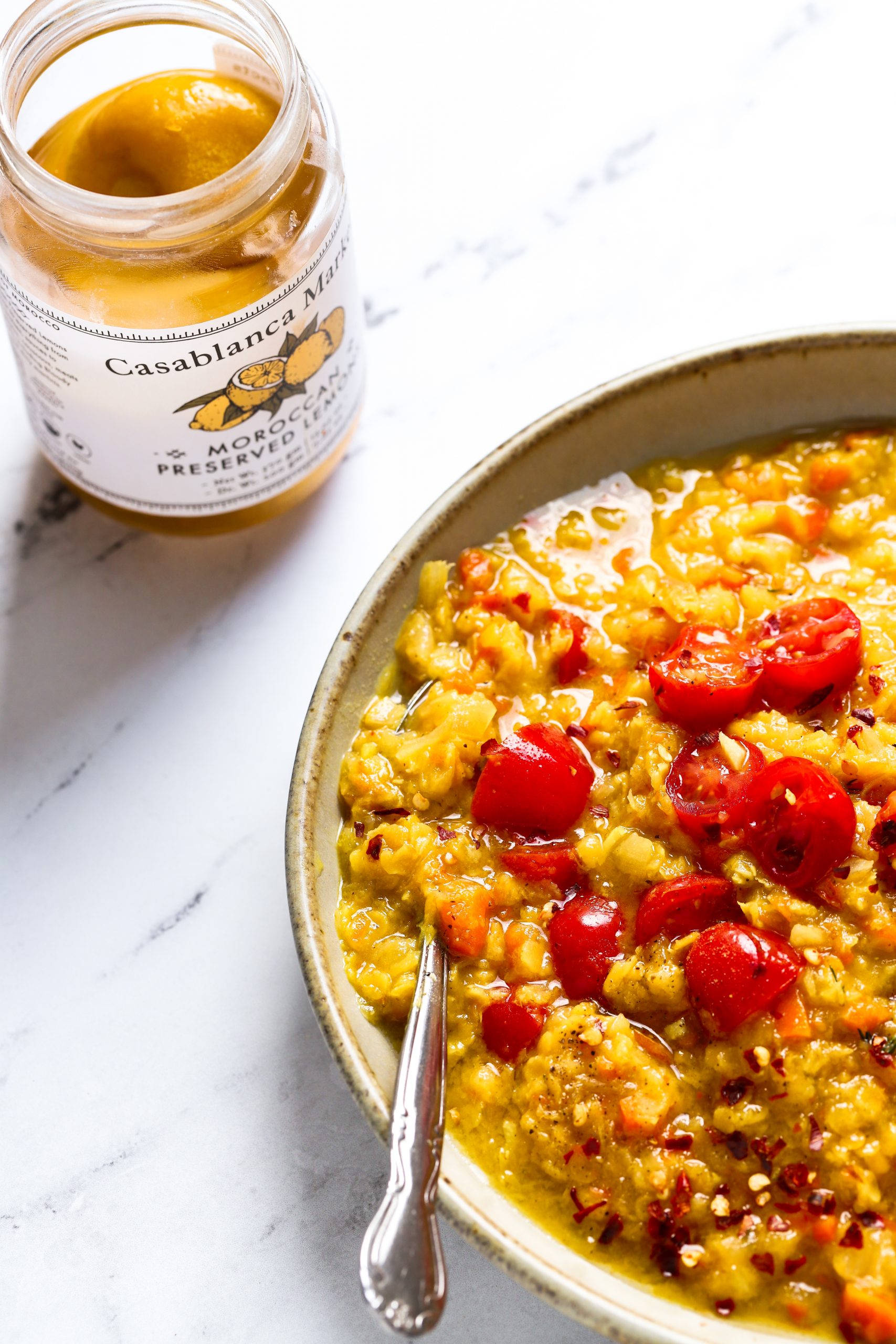 For this recipe, I used Moroccan Preserved Lemons from Casablanca Market. They were kind enough to send me a few of their products to try but I wasn’t paid to use them for this post. Their preserved lemons added so much intense flavor to this soup and have been a very welcome addition to my kitchen! 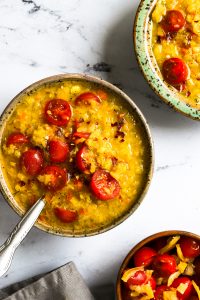 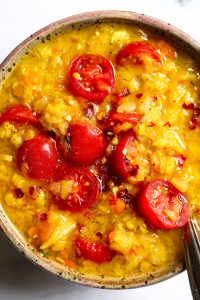 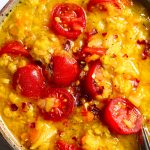 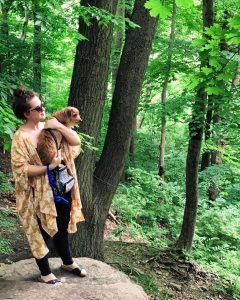 📖 ☕️ 🎃
A few books I hope to get to in September from my physical TBR 📚
It’s been a summer of quiet solo porch reading with my tomato plants. Since my porch faces west, it’s pretty cool until mid-afternoon even on 90+ degree days.
Love me a good twisted heroine.
I stacked my physical TBR in my non-functional fireplace and I kind of love it 😍 But it makes me want to paint the bricks white.
This summer I’ve been in a serious creativity slump when it comes to cooking and creating new recipes. Sometimes cooking just feels like a chore, ya know? It’s all good, I’ve been focusing more of my time on putting a dent in the ol’ to-be-read pile instead. 📚⁣
When you stop putting all/any of your self worth into Instagram, it becomes so much more fun to actually share and connect 🙃
Chaotic chocolate drizzle energy + arguably too much flaky salt.⁣
Sourdough Saturdays 🍞⁣
Pittsburgh finally has a real all-vegan bakery. I’m talking one with a clean and bright storefront that doesn’t make me want to turn around and never eat a donut again (IYKYK). ⁣
My dad grew these beauties
Juicy little book haul + a few of the library books I’ve been devouring lately 🤗 📚 📖 ⁣
Showing off a few of my 5⭐️ reads from this year before we get too far past the halfway point of the year! I am a library book lover and a lender of the books I own and love most, so unfortunately many of the books I’ve rated 5⭐️ this year are no longer in my possession. In particular, I’d like to mention Purple Hibiscus by @chimamanda_adichie which is possibly the best book I’ve read this year. I loaned my copy to a friend at the start of quarantine so it wasn’t available for the photoshoot 📖
Last three//next three 📚 ⁣
Let something ordinary arrest you with its beauty today. If you can lie awake for hours drowning in fear, you can let one moment consume you with joy or at least surprise that life can be so sweet. ⁣
Just the dreamiest at-home cardamom vanilla latte 🥰 I added a pinch of sea salt and cardamom to the coffee grounds before brewing as well as a dash of vanilla in the milk while frothing. Such a tasty afternoon pick me up (because apparently now I drink coffee any time of day 🙃)⁣
In college I ate oatmeal with banana and peanut butter every single morning, alongside a cup of hot tea or coffee. That’s hundreds of bowls of the exact same oatmeal I’ve eaten in my life. And it still hasn’t gotten old 😆⁣